If you’re wondering how to choose a Medicare Prescription Drug Plan that works for you, the best way is to start by looking at your priorities. See if any of these apply to you:

Look at drug plans offering coverage in the coverage gap, and then check those plans to make sure they cover your drugs in the gap.

3. I want my drug expenses to be balanced throughout the year.

Look at drug plans with no or a low deductible, or with additional coverage in the coverage gap.

4.  I take a lot of generic prescriptions.

Look at Medicare drug plans with “tiers” that charge you nothing or low copayments for generic prescriptions.

5. I don’t have many drug costs now, but I want coverage for peace of mind and to avoid future penalties.

Look at Medicare drug plans with a low monthly premium for drug coverage. If you need prescription drugs in the future, all plans still must cover most drugs used by people with Medicare.

6. I like the extra benefits and lower costs available by getting my health care and prescription drug coverage from one plan, and I’m willing to pick a drug plan with restrictions on what doctors, hospitals, and other health care providers I use.

All plans must cover a wide range of prescription drugs that people with Medicare take, including most drugs in certain protected classes, like drugs to treat cancer or HIV/AIDS. Information about a plan’s list of covered drugs (called a “formulary”) isn’t included in this handbook because each plan has its own formulary. 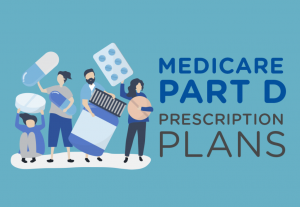 Many Medicare drug plans and Medicare health plans with drug coverage place drugs into different levels called “tiers” on their formularies. Drugs in each tier have a different cost. For example, a drug in a lower tier generally will cost you less than a drug in a higher tier.

There are certain kinds of drugs that are excluded from Medicare coverage by law. Medicare does not cover:

Note: Prescription drugs used for the above conditions may be covered if they are being prescribed to treat other conditions. For example, a medicine for the relief of cold symptoms may be covered by Part D if prescribed to treat something other than a cold—such as shortness of breath from severe asthma—as long as it is approved by the U.S. Food and Drug Administration (FDA) for such treatment.